A field hospital which remains on alert for a possible second coronavirus wave has been put into use by a health board.

Llandudno’s Venue Cymru was converted into Ysbyty Enfys/Rainbow Hospital in April and May and fully set up to take patients recovering from Covid-19.

However, the anticipated wave of cases didn’t materialise and the facility, along with sister sites at Bangor and Deeside, has been on standby ever since.

Last week, giant oxygen tanks were installed near the building and Betsi Cadwaladr University Health Board confirmed it was holding on to all three Rainbow Hospitals in case a second wave of the virus hit the region.

Now a councillor has revealed the hospital is being used after all.

“Our teams have been in regular contact with the Betsi team.

“There’s no timetable for going back (to being a theatre) but we hope the hospital is not put into full use.”

Last week, Betsi Cadwaladr said it was keeping the field hospitals in readiness for a potential second spike in Covid-19 infections after delivery and installation of the 20ft high oxygen tanks.

Mark Wilkinson, BCUHB’s executive director of planning and performance, said at the time: “We’re aware of the potential threat posed by a second wave of COVID19, and will remain prepared to manage that should the need for additional capacity arise.

“Temporary facilities will remain open for as long as we feel they may be needed to meet the health needs of people across North Wales.”

He added: “We will share information on any role our temporary hospitals will play as and when any further decisions are made.”

The health board has been asked for comment on the new role the hospital is playing in delivering antibody tests and maternity outpatient services. 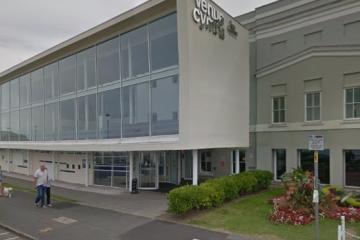