TRIBUTES have been paid to a much loved former headteacher who has died aged 89.

Peter Watkinson held the position as head of Rydal School from 1968-91 and was responsible for significantly positive changes across the site during his tenor.

He oversaw the transition from an all-boys school, introducing more female pupils from 1970 before becoming fully co-educational with the opening of two girls’ boarding houses.

Sally-Ann Harding, head of Rydal Penrhos Senior School, said: “Peter was a true gentleman and all that knew him spoke very highly of him.

“He was loved and admired by staff and pupils alike.”

Edenfield opened its doors in 1977 and Heathfield followed shortly after in 1980. This was a landmark change for Rydal, which had been male-only since 1885, and Mr Watkinson’s forward-thinking played a leading role in this landmark move.

Mr Watkinson’s passion to make the school a better place was evident throughout the entirety of his time as head.

The Art Studio was officially completed from 1969-70, and two squash courts were also constructed around the same period.

In 1984, Mr Watkinson oversaw the construction of Rydal’s Technology Centre that houses the school’s Design Technology department, and a Music School was also completed during this time period.

Debbie McCluskey, a former pupil and current staff member, said: “As my headmaster I found Mr Watkinson to be one of the most quietly influential people in my life.

“He made me raise my expectations of myself and encouraged me to achieve more than I thought I could achieve.

“Looking back this is what gave me the confidence to do what I have in life and is really the best gift an educator can give any child.”

Mr Watkinson had the honour of being Headmaster for Rydal’s centenary in 1985, at which time there were more than 500 boys and girls in the Senior and Prep Schools combined.

Mr Watkinson stepped down from his post in 1991 and was replaced by Nigel Thorne.

In recognition of his exceptional dedication to the school, the Watkinson Library was named in his honour, now home to the Business department.

Mr Watkinson kept a keen interest in all things related to the school in his role as an honorary member and life vice-president of the Rydal Penrhos Society.

Lucy Davies, former pupil and Head of Prep School, said: “Peter Watkinson or ‘Chiz’ (on account of his very chiselled profile) as he was known to all pupils, was equally revered and loved by all pupils.

“I never heard a bad word spoken about him.

“He was my sixth form headmaster at Rydal and, as a prefect, we would be given instructions as to what he wanted doing in regards to all areas of pupil school life, including quad duties, chapel behaviour and how loud the singing should be which accompanied home rugby matches at New Field on a Saturday afternoon.

“I sometimes felt that I was being educated in a school for boys but I think Chiz was the Headmaster who really removed that notion; he genuinely wanted the girls’ voices to be heard and treated equally and he never treated us in any sort of tokenistic way, indeed he did not distinguish us from the boys.

“Peter Watkinson was a headmaster who led by example, who inspired both pupils and staff, and was missed by all after his retirement in 1991.

“He was a strong family man and my thoughts are with his family at this very sad time.”

Mark Sherrington, head of art, added: “As former pupils, Karen and I are very, very saddened to hear of the passing of Peter. He very much set the tone and ethos of the place during the 70’s and 80’s with his memorable sermons on a Sunday morning and Chapel every day.

“A man of considerable intellect but also seen as kind and fair by the pupils. He steered a thriving and vibrant school, which seemed to us almost effortless but clearly with great skill. In those days to find yourself in the headmaster’s study was a rare and potentially frightening thing- you had to have done something truly terrible to be stood in front of his desk. He would sit, almost horizontal, listening carefully but always with deep Methodist compassion and wisdom.

“I saw him recently on a couple of visits to the school, frail but with the same razor-sharp wit and humour. We listened to him speak brilliantly (and without notes) at John Darlington’s memorial service. He returned again a couple of years ago. We sat in his former study as he delivered a couple of diamond one-liners at my expense and I remember thinking then how remarkable he was and how he hadn’t changed.

“His Christmas letter, that my parents received every year, was always full of that characteristic self-deprecating humour and warmth that seemed to run through everyone’s encounters with him.” 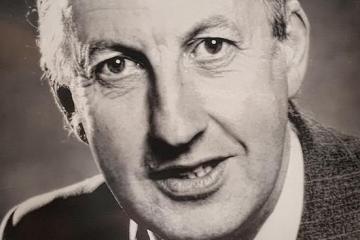