THE Llandudno Transport Festival returned to the town yesterday (April 30) for the first time in three years with an array of exhibitions at Bodafon Fields before parading into Conwy.

Now its 30th year, the festival showed off more than 1,000 exhibitions, including lorries, tractors and motorbikes for visitors to enjoy.

Then, at roughly 6pm, a cavalcade of exhibits left the showground to grace the streets of Conwy, before heading back to Llandudno.

This included vintage motorcycles, to the heaviest haulage truck being used on the roads.

The vehicles travelled via Llanrhos and Deganwy, through a heavily marshalled route into and within Conwy, through the town’s tight arches, before returning to the fields. 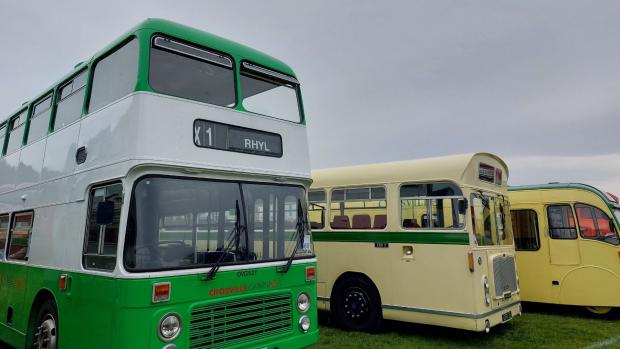 Some old buses at the festival

Festival organiser Jim Ricketts said: “It’s been quite a special event, after nothing happening for two-and-a-half years. It’s been a really busy day.

“It’s a family-run event, and something we’ve been doing for 30 years now, but this is probably the biggest one we’ve had.

“There are more than 1,000 vehicles here – anything from the biggest heavy haulage tractor used on the British roads until it was retired a few years back and went work in Africa, down to a penny farthing in our other field!

Some of the vehicles on display at the Llandudno Transport Festival

“We’ve got a bit of everything: tractors, cars – a lot of from Ireland – a barn engine which drove generators and corn mills, anything motorised.

“I’d find it hard not to check out everything- you’ve got to have time to do it all, because it’s just such a fascinating display of transport.

“COVID obviously put a hold on things, so it’s been nice to put it back on. The interest has been phenomenal; so many people have wanted to come.”

Delight as the Victorian Extravaganza returns to Llandudno!

What to expect from Llandudno’s Victorian Extravaganza and Transport Festival

For the drive into Conwy, the Pioneer was treated to riding alongside Graham Booth, owner of the ALE heavy haulage tractor, the 1989 Faun HZ 50, also known as “Goliath”.

Only of only three built, it is, capable of moving up to roughly 300 tonnes, and was shipped to South Africa in 2010 to move heavy electrical equipment for two new power stations being built.

Graham, from Southport, purchased it in December 2020 and brought it back to the UK, with its restoration completed in early 2021.

Graham said: “It’s been great to see a lot of people back out, and a lot of nice vehicles make the journey. I think everybody’s needed this after a bad two years.

“It’s one of the best shows, because while it’s nice to see vehicles like this static, but people don’t know what it sounds like or what it’s like when it moves.

“Driving this is a bit like going into your bedroom; I’ve never done anything like this before – I drove it in towns in South Africa with 1,000 tonnes behind, but never trundled the streets of Conwy!”

The festival was run in conjunction with Llandudno’s Victorian Extravaganza, with a free “hop on, hop off” shuttle bus service from Vaughan Street connecting both events.

This evening (May 1), some of the exhibitors will leave the site again; this time, travelling through Llandudno, ascending Marine Drive on the lower part of the Great Orme, home of roughly 150 Kashmir goats.

More cars on display at the festival drive into Conwy

The parade will stop at a halfway point by the “Rest and Be Thankful” café on Marine Drive.

This is not the only major event at the festival on Sunday: there is also the annual Crosville gathering of buses, coaches and enthusiasts.

Entertainers and traction engines will also join in with the daily Extravaganza street parade to circle the town, lasting roughly an hour.

A selection of tractors at the Llandudno Transport Festival

The Transport Festival gates open each day at 9am until late on Saturday and Sunday, and 5pm on Monday, with the bus service running all day from 10am.