A RESCUE operation was launched after a 22-foot long boat suffered engine failure.

Llandudno’s all-weather lifeboat William F Yates was called out by Holyhead Coastguard to assist the motor vessel which was drifting off the Great Orme.

Speaking about the incident, which happened at about 2pm on Thursday, July 23, a spokesperson for Llandudno Lifeboat said: “In deteriorating weather conditions The William F Yates with her volunteer crew soon reached the stricken craft and after securing a towline took it up-channel into the River Conwy to place the boat safely in Deganwy Marina, its three occupants unharmed.

“The lifeboat then returned to the Llandudno Lifeboat Station for it’s beach recovery at 4.10pm.

“This was a good operation. We were able to successfully carry out our rescue whilst also safely adhering to all the procedures and precautions we have put in place during the Covid 19 situation.” 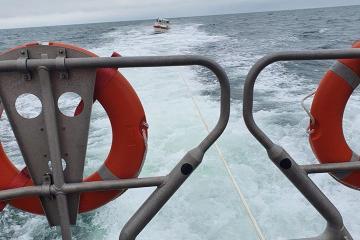