THE biggest clue yet that Gwrych Castle is poised to play host to I’m A Celebrity…Get Me Out Of Here! has been dropped.

ITV revealed on Friday that the 20th series of the popular reality show – which attracts on average more than nine million viewers – will be filmed in the UK at a ruined castle in the countryside.

Now a campsite nearby the attraction near Abergele said it has been approached by ‘producers’.

A spokesperson from Castle Cove Caravan Park in Pensarn told the Journal: “Yes, producers have been in touch about finding somewhere for crew to stay while filming.”

They also showered Dr Mark Baker, chairman of Gwrych Castle Preservation Trust, with praise stating: “Mark has achieved great things and we are all very proud of him and his commitment to this is truly amazing.”

According to national media reports, ITV is spending more than £1million on taking over the Grade I listed country house that stands in 250 acres of gardens and grounds.

Hosts Ant and Dec will present the series and the set up will remain similar to previous years – viewers will see celebrities undertake gruelling trials and challenges to win food and treats. The winner will be crowned King or Queen of the Castle.

Gwrych Castle was built between 1812 and 1822 by Lloyd Hesketh Bamford-Hesketh as a memorial to his mother’s ancestors, the Lloyds of Gwrych. Picture: Don Jackson-Wyatt

The Journal approached Dr Baker for confirmation but he declined to comment at this time.

Cllr Sam Rowlands, Conwy council leader and trustee at the castle, also was unable to comment at this time.

Richard Cowles, director of Entertainment at ITV Studios, said: “We pulled out all the stops to try and make the series happen in Australia.

“Unfortunately, due to the ongoing Covid-19 pandemic and despite us looking at many different contingencies, it became apparent that it just wasn’t possible for us to travel and make the show there. However, we are all really excited about a UK version of I’m A Celebrity. While it will certainly be different producing the show from the UK, the same tone and feel will remain.

“Our celebrities will probably have to swap shorts for thermals but they can still look forward to a basic diet of rice and beans and plenty of thrills and surprises along the way.”

The Gwyrch Castle Preservation Trust purchased the site in June 2018. It was able to go ahead after National Heritage Memorial Fund (NHMF) stepped in with a grant of £600,000.

A major grant was also received from the Richard Broyd Charitable Trust.

It was a year come true for Dr Baker who as a child, would pass the castle everyday to and from school.

Aged 11, the campaigner founded the castle trust and more than 20 years later, the castle is starting to come back to life and is becoming more accessible to the public.

Darren Millar, MS for Clwyd West, said: ‘I’m a Celebrity’ is a huge TV hit with millions of people across the UK tuning in every night so I’d be delighted to welcome Ant and Dec to Abergele and have it filmed in the constituency.

“The show could really help to raise the profile of the local area and draw attention to the plight to restore Gwrych, one of North Wales’ most iconic fairytale castles.

“If it does come then local people and businesses should also benefit from the work and supplies required to make a hit show like this happen.”

On Monday, August 10, a crane at Gwrych Castle caused further speculation and attracted the attention of national papers.

Gwrych Castle posted on their Facebook that the crane was part of ‘day one of planned emergency works to conserve the central keep at the castle.’

They added: “The area is a mix of medieval timbers and Georgian Masonry.” 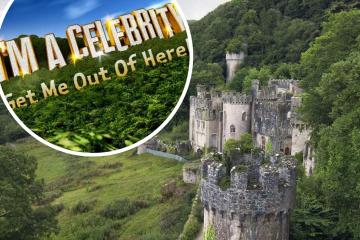 LLANDUDNO and Conwy are some of the cheapest towns for beach treats like fish and chips and 99′ ice creams. North Wales Pioneer | Llandudno…

A discussion about the impact of unregulated accommodation raised strong emotions with one councillor accusing local authorities of “neglecting their duties” by not inspecting Air BnB properties. North Wales Pioneer | Llandudno…

THE visit of singer and actor Michael Ball to Llandudno’s Great Orme mines will be shown on Channel 5 on Friday, July 30. North Wales Pioneer | Llandudno…