FIONA Bruce and the Antiques Roadshow team have been filming at Bodnant Garden, valuing family heirlooms and missing masterpieces.

The show, which has been running for more than four decades, was filmed on Wednesday, September 2 and Thursday, September 3 on a closed set with a small invited audience only, to ensure the safety of guests, production and the wider public.

Two programmes have been filmed at Bodnant Garden, which will be broadcast early next year.

Presenter Fiona Bruce, who is filming her 13th series of Antiques Roadshow, said: “Normally we welcome around 5,000 people to each Antiques Roadshow, but of course in these extraordinary times we will have to do things very differently.

“We’ve come up with a new way to safely film the show yet still bring you amazing items and stories .

“We’ve had a wonderful time at Bodnant Garden filming some stunning items in the blazing sunshine and pouring rain.

“Our experts have seen some really intriguing and valuable objects and I can’t wait to see the finished programmes.”

First broadcast in 1979, the roadshow remains one of the most popular factual programmes on BBC One with some six million people regularly watching on Sunday evenings.

Some of the Roadshow’s most fascinating finds include a Faberge flower ornament worth £1million, a handwritten document signed by Elizabeth I, a ring containing a lock of author Charlotte Bronte’s hair, a wristwatch owned by Lawrence of Arabia, a 17th Century miniature book reviewing Shakespeare’s plays and a leather jacket worn by John F Kennedy.

She said: “I was delighted to have been invited to view the filming of this beloved BBC One programme. I was incredibly pleased to witness the innovative ways that this brilliant TV production has adapted so that viewers can continue to be enthralled by the nation’s heirlooms.

“Whilst production of this programme now moves on, I encourage both local residents and our welcome visitors to visit the beautiful grounds of Bodnant. We are incredibly lucky to have such an expansive 80-acre garden estate on our doorstep.

“Even under the current circumstances, I am that an army of committed volunteers and currently 6 groundskeepers continue to work tirelessly to maintain this Eden on earth. Their persistent and dedicated handiwork is clearly paying dividends.”

Bodnant Gardens span 80 acres of hillside and includes formal Italianate terraces and informal shrub borders stocked with plants from around the world.

This National Trust site is set to feature in the updated film adaptation of The Secret Garden. This is due to be released later this year. 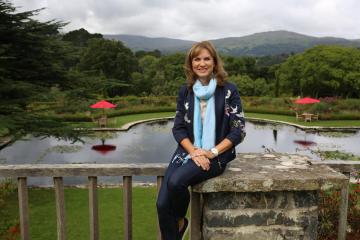 A MAN has died following a crash on the A470 on the outskirts of Llandudno yesterday (October 19). North Wales Pioneer | Llandudno…

A CRASH has caused a Llandudno stretch of the A470 road to close. North Wales Pioneer | Llandudno…

A VESSEL suffering engine failure had to be rescued by lifesavers. North Wales Pioneer | Llandudno…

THE government’s decision to end the £20 weekly increase to Universal Credit brought in at the start of the COVID-19 pandemic has garnered a negative reaction from councillors and a food bank worker in Conwy. North Wales Pioneer | Llandudno…