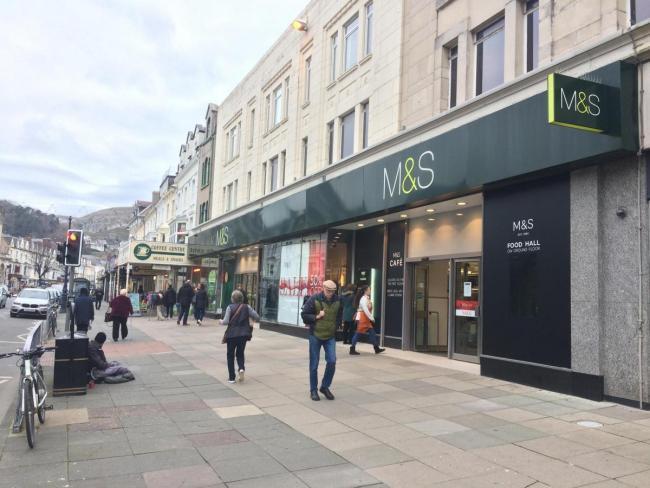 POLITICIANS and councillors representing Llandudno have called for the Mostyn Street site left vacant following Marks and Spencer’s relocation last week to be quickly filled to boost the area’s economy.

Last Wednesday, M&S moved from 61 Mostyn Street, where the store had been based in Llandudno for more than 80 years, to the Parc Llandudno retail park, taking on the unit formerly occupied by Debenhams.

Despite M&S expanding at a larger site, in what it says is the first store of its kind in Wales, it has left behind empty retail space on one of Llandudno’s most popular streets.

Last week, the Planning Department at Conwy County Borough Council also confirmed that it has not yet received any applications to take on the Mostyn Street site.

Robin Millar, Aberconwy MP, called for a new food centre to take its place, which he said “could make an invaluable contribution to our local economy”.

Mr Millar said: “It is vital that the site is used to create new, sustainable and long-term employment opportunities and its location in the heart of the town would make it well-suited to an innovative, all-year-round visitor attraction.

“I am proud that Aberconwy is home to the finest food producers to be found anywhere in the world, from our family farms to Baravelli’s Master Chocolatiers of Conwy and from Llandudno’s Wild Horse Brewing Company, to Gwinllan Conwy Vineyard.

“A new Welsh food centre, featuring the best of what we have to share, would entice visitors to return time and time again – in all weathers – and could make an invaluable contribution to our local economy.”

Music and song at opening of new M&S in Llandudno

Janet Finch-Saunders, Aberconwy MS, added that she hopes the site will soon be taken on by a major company, which would hopefully continue the increase in footfall which region saw last summer.

Mrs Finch-Saunders said: “It is a prime site on Mostyn Street. I hope that a major company decides to invest here because the town offers a brilliant opportunity for any business to thrive.

“Llandudno is the premier shopping centre of North Wales, and as a popular seaside resort, is rightly recognised as the jewel in the Welsh crown.

“Footfall increased last summer and is expected to improve again, so I hope that the site will not be empty for long.”

Meanwhile, two members of Llandudno Town Council, both representing the Gogarth ward which Mostyn Street is found in, called for the site to be maintained as retail space, given its ideal location.

Councillor Greg Robbins said: “It’s obviously a prime retail location on the high street, and has served as such for a very long time, and I think, with the right backing and ideas behind it, it could be very successful in the future.

“I just want to see it redeveloped as soon as is practical.

“It’s really quite open; I could see it potentially being not just one unit, but divided, depending on what the owners’ future plans are.

“Anything that serves retail there, rather than anything else, would be absolutely ideal for the town centre.”

Likewise, Cllr Margaret Lyon added: “I’d like to see something really interesting there. We’re going to miss Marks and Spencer, but if it was a nice, big department store (taking its place), that would certainly make a lot of difference to the town.

“We miss Debenhams, but that’s gone now. It would be important to get some retail space there, and to make sure that the town doesn’t go down.

“Whatever comes there would be for the good of the town, but it badly needs retail space there.”

The main key features from the new Marks and Spencer at Parc Llandudno:

• A “pick your own eggs” section

• A 119-seat digital café, where customers can order from the new Grab and Go touch screens while enjoying barista-made drinks