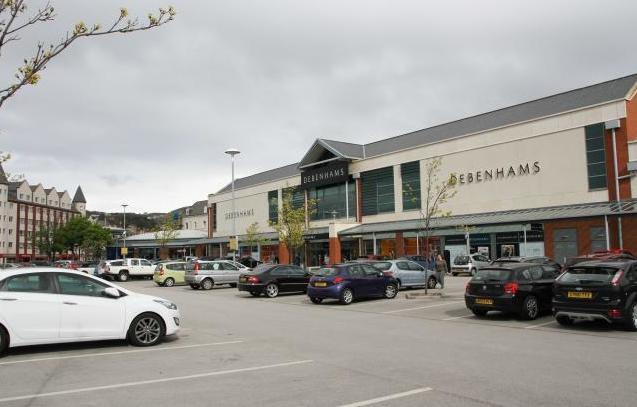 CONCERNS have been voiced over the future of shopping in Llandudno after reality hit that the retail park could soon be left with two huge empty units.

The fate of Llandudno Debenhams was sealed after it was confirmed that online fashion retailer Boohoo had bought the brand for £55 million.

The deal will see the Debenhams brand name survive but the company’s remaining 118 stores, including Llandudno – will shut for good.

Outfit, also located on Parc Llandudno, is set to close along with 21 other Outfit stores across the UK.

Arcadia Group, who own the Outfit shops, collapsed into administration at the start of December.

Both closures will result in the loss of hundreds of jobs in Llandudno.

Janet Finch-Saunders, Aberconwy MS, said: “With almost one in five shops in Wales empty, urgent action is required to help our high streets. A mix of chains and independent shops is crucial, so we need to see the Welsh Government using all levers at its disposal to help keep high streets on their feet.

“That is true for us here in Llandudno, especially now that major anchor stores such as Outfit and Debenhams have extremely uncertain futures. Should these units become empty, I am very worried that there will be a major knock on effect on the town.”

One reader commented on the Pioneer Facebook that she had seen staff from Outfit loading ‘rails and rails’ of clothing into the back of a container wagon.

Another Facebook user, Debra Gent, called the closures as ‘heartbreaking’ whilst reader Bill Heatley posted: “Going around Llandudno will soon be like a stroll on the beach – full of empty shells where shops used to be.”

The retail park lost Monsoon and Accessorize and Laura Ashley in 2020.

Thorntons, which was based in the Victoria Shopping Centre, also shut last year.

Ms Finch-Saunders is calling on the Welsh Government to make Llandudno a business rate free zone for three years, to help businesses bounce back.

She said: “There are steps Welsh Government can take to help make major empty units more attractive – such as via grants and rate relief.

“They should also investigate the possibility of making Llandudno a business rate free zone for three years, to help maintain jobs and encourage future investment.”

Earlier this month, Argos confirmed they would be vacating their premise on Mostyn Champneys Retail Park; the landlord has given notice on the build.

There has also been talk that German discount supermarket Aldi is keen to expand and will possibly take over the Argos site.

Cllr Philip Evans, of Tudno ward, said: “The changes brought about by online shopping are having a marked effect across the UK and this is being accelerated by the restrictions due to the pandemic.

“It is very regrettable that some businesses locally are either closing or changing their operations and you feel for the people affected.”

Cllr Evans was keen to stress that there is some positivity; Penderyn is now recruiting as its Llandudno distillery and visitor centre nears completion.

“There are some good signs such as the development of the Tudno Castle and the coming of the Penderyn distillery and it’s visitor centre,” he added.

“It is good that Llandudno is still seen as a place for other types of businesses to invest.”

NORTH Wales has reached another key milestone in its efforts to vaccinate their efforts against coronavirus. North Wales Pioneer | Llandudno…

A SECOND outbreak of coronavirus within a North Wales hospital has been declared. North Wales Pioneer | Llandudno…

A MUM has spoken about the terrifying moment she and her family members were nearly hit by a car. North Wales Pioneer | Llandudno…

A 25-year-old man has appeared before Llandudno magistrates today (Friday) accused of robbery and attempted robbery at shops in the town centre on Wednesday. North Wales Pioneer | Llandudno…