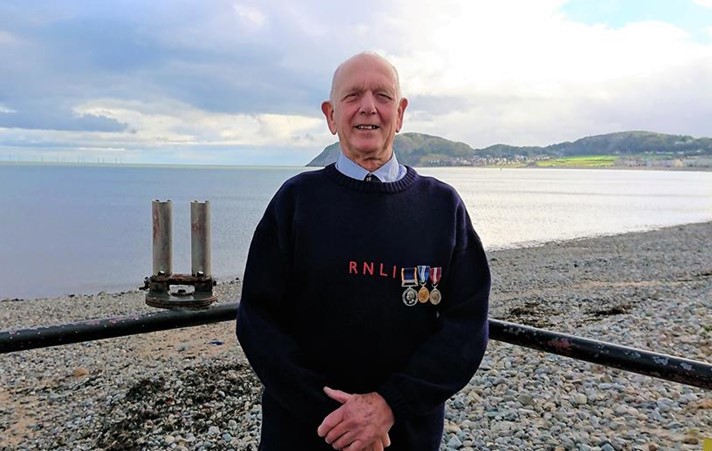 MEMBERS of Llandudno RNLI were proud to celebrate the landmark achievement of 40 years’ service for volunteer Keith Charlton.

Keith has volunteered at both Beaumaris and Llandudno, serving on many different lifeboats; he started at Beaumaris in 1981 when the station still had an all-weather lifeboat and an inshore lifeboat in two separate boathouses.

Keith was the last serving winchman before the all-weather lifeboat station was decommissioned in 1991.

Not long after, he moved to Llandudno, becoming one of the station’s assistant mechanics.

Keith has also been a crew member on both the inshore lifeboat and the all-weather lifeboat, a launch vehicle driver, shore crew, reserve head launcher, safety officer and now boathouse manager.

During his long service, Keith has completed hundreds of rescues with many lives saved, and recalls that some were particularly challenging and arduous, and some sadly with distressing conclusions.

One of Keith’s most poignant memories was being involved with the transfer of a relief lifeboat to Cornwall after the harrowing tragedy involving the Penlee lifeboat, Solomon Browne, in 1981.

He also vividly recalls a particular ‘shout’, spending many hours at sea in a force 10 gale on board ‘The Robert’, a Watson-class lifeboat, when the crew were tasked to attend and escort the training ship Kaskelot from the Anglesey coastline back to Liverpool in the most treacherous conditions.

Representing the RNLI, Keith has also enjoyed meeting members of the Royal Family; he recently met with the Duke and the Duchess of Cambridge, who talked with him about Prince William training with Llandudno RNLI during air sea rescue helicopter exercises.

Like many volunteers in the RNLI, Keith’s family have played a huge role in supporting him during his 40 years of service.

His wife, Sue, is a member of the HM Coastguard, while following in his footsteps, son Robert has been a serving crew member at Beaumaris, as was his late son Darren before him.

Captain Marcus Elliott, lifeboat operations manager for Llandudno RNLI, said: “It’s a fantastic effort by Keith; he has been a loyal and diligent crew member for the last 40 years.

“He has given great service to Llandudno RNLI, and we are immensely proud to honour his achievements.”

Current coxswain, Graham Heritage, added: “Keith has always been a highly respected member of the team.

“His knowledge and experience has been passed down to new crew members over the many years of his service.

“He has always made himself available night or day and has been a valuable asset to Llandudno Lifeboat.”