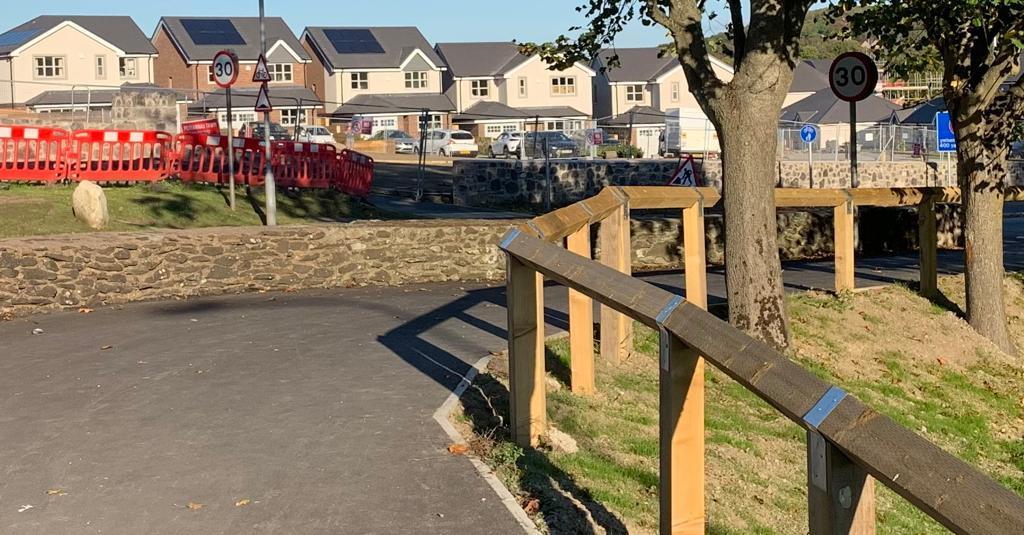 A MEMBER of Conwy County Borough Council has asked the authority to make improvements to a new wooden fence erected after the creation of a cycle path in Llandudno Junction.

Councillor Sue Shotter (Marl ward), along with a Llandudno Junction resident, have both said the wooden fence, which replaced a stone wall on Marl Lane, is a potential hazard to children and pedestrians.

The cycle lane was constructed earlier this year, and cuts across Albert Drive, across Pentywyn Road and on to Marl Lane.

On the other side of the road to the wooden fence is a stone wall, in front of a development site led by Llandudno Junction company, Beech Developments.

But Cllr Shotter said the ‘wooden structure’ is a danger, and had asked for a meeting with the council’s Highways officer to discuss it after also receiving numerous complaints from residents about it.

It is also situated by a small field where children sometimes play, and Cllr Shotter believes that, compared to the security offered by the old stone wall, the new wooden fence pales in comparison.

She said: “The problem is they pulled down a lovely, really well-made wall and put a really cheap wooden wall back up in its place, which looks horrendous.

“I can’t even give a polite name for it because it really is not up to what I would expect.

“Its an open structure as well, whereas before, the wall was tall and quite well-built. So, if you do want to have your kids on there, you have to be totally alert about making sure they don’t squeeze through and run onto the road.

“In my time as a councillor, we’ve had cars come down off Pentywyn Road, round the sharp bend and onto Marl Lane, coming too fast and clipping over straight into the green. That fence isn’t going to save anybody if they’re on the green or cycling past.

“It’s not very good to look at; I’ve had numerous complaints.”

Jean Owens, who lives on Tan-Y-Gaer, a road which overlooks the fence, echoed Cllr Shotter’s safety concerns, adding that the new wooden fence feels incongruous with its surrounding area.

Jean said: “It doesn’t look nice. Although they’ve left a bit of it (the old wall) on the outside at the top of Marl Lane, it doesn’t look right at all.

“I haven’t seen anybody use the cycle path; they should have finished it off by putting a wall around the field, putting it back to the way it was on this side of the green so it makes it look nicer and it’s in keeping with here.

“Instead of putting the wood up, I don’t know why they couldn’t have finished off rebuilding the wall.

“It was lovely to see children play or have a picnic on this little field; even the dogs, we never had a problem with them. It was just a nice, small, contained field, more like a village green.”

Conwy County Borough Council responded by saying in a statement: “Councillor Shotter has been in touch with the Highways team about the fence, and officers are considering the issues she’s raised.”