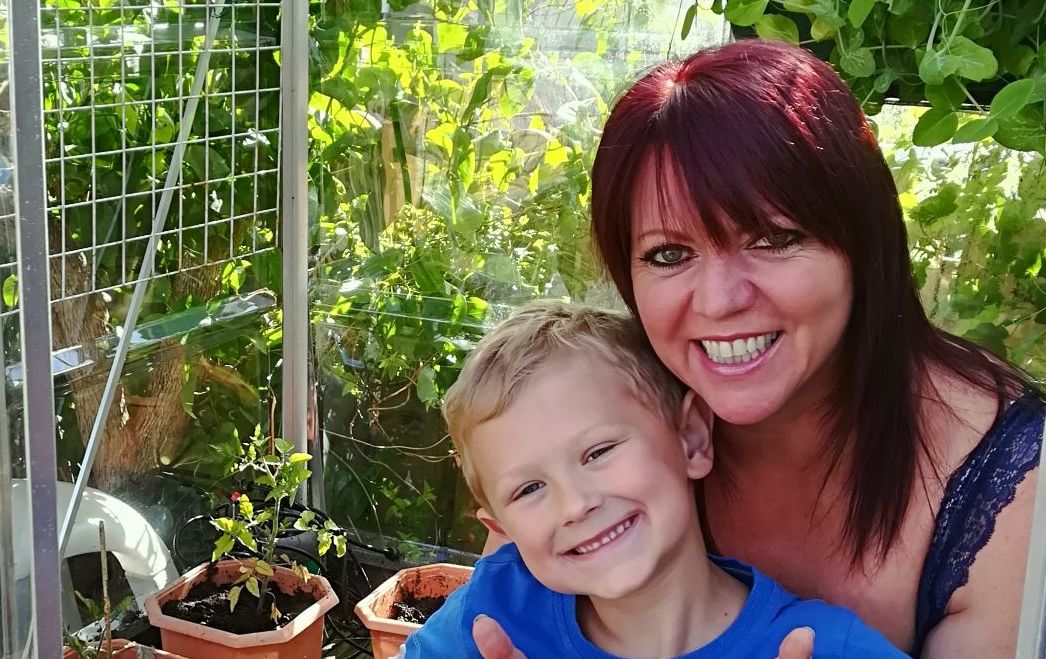 A MUM-of-one who received treatment for breast cancer during the virus pandemic is urging others not to delay treatment during this uncertain time.

Hayley Blackwell, 48, noticed a change in the shape of her breast during the height of the pandemic in May, and immediately contacted her GP.

The assistant headteacher at Ysgol Eirias in Colwyn Bay was referred to the Rapid Access Breast Clinic at Llandudno Hospital for an assessment.

She said: “I noticed a change in the shape of my breast and while I was driving in my car I heard a radio advert encouraging people not to ignore worrying symptoms or changes in their bodies during the pandemic.

“I didn’t hesitate calling my GP and following scans and assessments in Llandudno I was told I had cancer on 13 May, and the lump they found needed to be removed quickly.

“Two weeks later I was having my lumpectomy at Glan Clwyd Hospital, where biopsies were taken from the lymph nodes and cancer was found – I remember that day well as I was sat outside the hospital in my car with my husband and young son. I kissed my little boy goodbye and told him that I would see him later.

“My second operation was only two weeks later on June 15 where my lymph nodes were removed, which were now clear.

“That day I kissed my little boy goodbye again and at the same time felt very lucky, lucky that the cancer had been found in time.”

Hayley is now starting chemotherapy treatment and wishes to thank the hospital teams who cared for her.

“Despite the impact of Covid-19 on the NHS I received first class treatment, attention and care. I cannot fault a single action or person involved,” she added.

“I was amazed at how quick everything progressed and I was so impressed by my surgeon Mr Khattak and his team, they didn’t only think of saving my life but they also considered what the long term psychological impact would be if I had a mastectomy.

“Everyone is different and each patient has individualised care but I’m really grateful that this was considered as part of my treatment plan.”

Ilyas Khattak, consultant oncoplastic breast surgeon, who is based at Ysbyty Gwynedd and Llandudno Hospital, said the breast service has continued to run throughout the pandemic to ensure patients continued to receive timely care.

He added: “It was decided early on during the pandemic that breast cancer surgery and clinics would continue, although due to social distancing we have had to change the way we provide our clinics.

“Staff are all now wearing PPE and we have modified clinics so that we see fewer patients per session so we are able to keep people as safe as possible.

“We are prioritising our higher risk patients, who who have received a diagnosis or those who are likely to be diagnosed with cancer, but those with worrying symptoms will be seen, no one will be forgotten.”

“I have been extremely proud of the way our team have worked over the last few months, they are all dedicated individuals and everyone has worked well together.

“We managed to continue our theatre lists on a weekly basis and I’m extremely grateful to the support of the management teams at Ysbyty Gwynedd and Glan Clwyd Hospital for their support with this.

“We are extremely grateful to hear such positive feedback from Hayley and we wish her all the best in her recovery.”

Hayley, who is due to begin her course of chemotherapy to eliminate any cancer cells left behind and reduce the disease returning, is urging others not to ignore worrying symptoms during the pandemic.

“I knew I had to go and see my GP, even though I thought were was probably nothing wrong and if it was something serious then there would be no room in hospital because of the ongoing situation.

“It’s really important anyone who may have noticed something different about their breasts or found a lump to speak to their GP immediately.

“Don’t ignore a niggle. Don’t leave anything to chance. Don’t think that Covid-19 has the monopoly in the NHS and that what you are experiencing may be second to that.”

A DRIVER who left a nurse ‘for dead’ after colliding with him outside Wrexham Maelor Hospital has been jailed. North Wales Pioneer | Llandudno…

SEA creatures who deliver an ‘excruciatingly painful’ sting have been spotted on beaches in Wales. North Wales Pioneer | Llandudno…