A PUBLIC surgery was held in Craig-y-Don last week to allow residents to put their grievances regarding Openreach’s erection of telegraph poles in the area to representatives of the company.

The event, hosted by Aberconwy MS Janet Finch-Saunders, was held at Craig-y-Don Sports and Community Centre on June 10, with three Openreach officials also in attendance.

In February, Keith Baker, a resident of the Liddell Park area of Craig-y-Don, Llandudno, told the Pioneer that Openreach’s updating of telephone lines with fast-speed fibre cables on wooden telegraph poles roughly 10 metres tall, and overhead wires to replace existing underground phone lines in ducting, are “clouding the open skies”.

Mr Baker, 87, said that he and many fellow Liddell Park (which comprises about 100 houses) residents have been in constant opposition to these plans since they were announced in August and begun to be implemented in mid-December.

Mrs Finch-Saunders considered last week’s public surgery a success, and hopes that lessons have been learnt and appropriate action will be taken urgently. 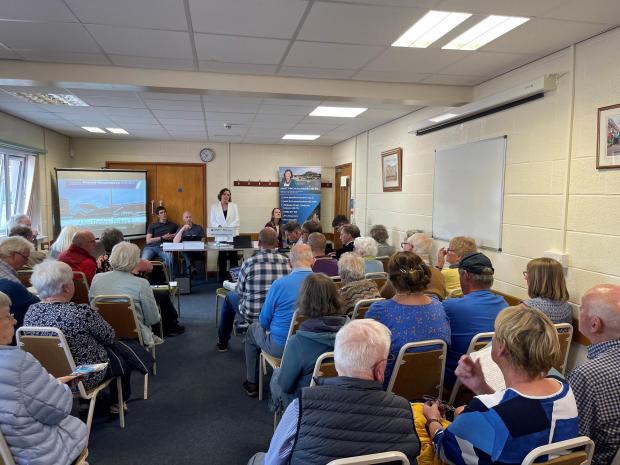 She said: “I was pleased to hold an event that allowed so many residents to put their questions and concerns directly to senior officials within Openreach.

“I would like to thank Suzanne Rutherford, Eilir Owen and James Roberts for attending this event.

“I was shocked to hear of the multitude of concerns raised regarding lack of a formal consultation being undertaken, the quality of work carried out, poles being placed in areas not indicated on original plans, health and safety concerns during the course of the installation of theses poles and the overwhelming numbers of poles erected on to an open plan estate.

“Additionally, I have been deeply disappointed to discover that many residents reported serious difficulties in contacting Openreach.

“For a communication company, this lack of clear communication is deeply troubling. It is imperative that this organisation must take immediate steps to address this situation.

“Furthermore, I was pleased to have obtained a commitment from Suzanne Rutherford, Director Wales and West, Chief Engineers, Openreach, that each of the concerns raised by residents in this event will be investigated into following this meeting.

“It is evident that resolutions to concerns raised must be forthcoming from this organisation. While it is clear that lessons must be learnt, it is imperative that action is taken to rectify this situation urgently.

“I look forward to continuing to work with Openreach on the issues raised in this meeting, and in seeing remedial action being taken across the Liddell Park estate.

“The disastrous approach taken by the organisation must be rectified.”

Mr Baker, who was also in attendance, has also previously criticised the lack of dialogue he has received from Openreach, despite previously attempting to discuss the issue with the company.

He bemoaned Openreach’s attitude to the plans, but also hopes that the public surgery will bring about positive change for the estate.

Mr Baker said: “There were maybe 75 to 100 people there. There was a very good turnout, and from the residents’ point of view, they were very upset.

“I’ve never been in a room with so many angry people. They had hands voting of people objecting to these poles, and it was unanimous.

“The biggest problem is the way Openreach say they can do anything they want, wherever they want, and that nobody can stop them. Everybody is aghast about that.

“A lot of people are really upset about it and the way they’ve gone about it.

“One person was up in arms about the health and safety aspect of the contractors and the way they’re doing things, another was complaining about the new poles swaying in the wind, another complained that they’d put a cable over the top of his bungalow without asking his permission.

“Their attitude was that they don’t have to ask permission.

“If they take on board the atmosphere of the room, and not still adopt the attitude about doing whatever they want, then it was a constructive meeting.”

Likewise, another resident who attended, Phyllis Oliver, said her house now has “eight poles in sight and are surrounded by a web of cables”. 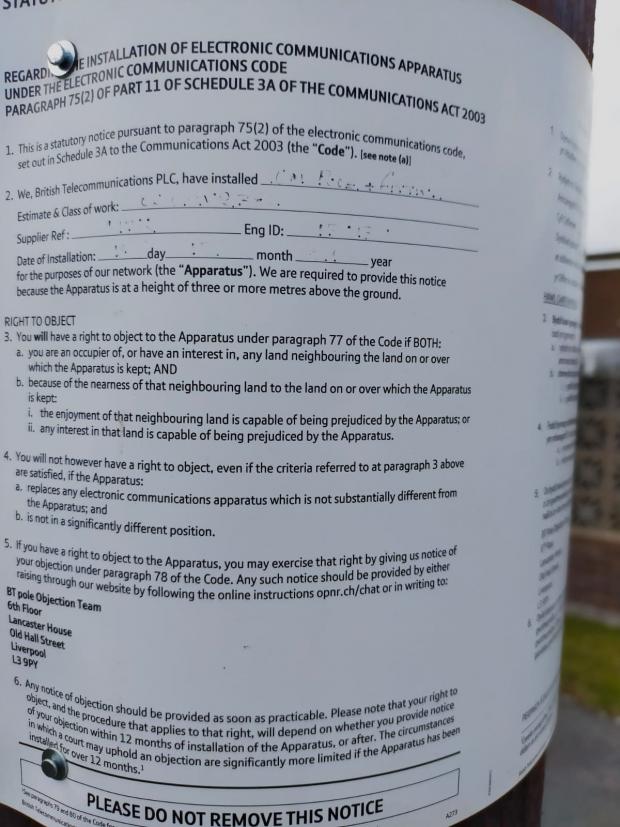 Signage posted on one of the new telegraph poles. Photo: Phyllis Oliver

She had mixed feelings about last week’s meeting, saying: “(It was) very successful because people could express their experiences, knowledge and feelings.

“It’s as if the Liddell Park estate has been visited by a biblical plague. I don’t know what we have done to deserve this.

“We have a tower house on a corner with stunning 360-degree views, and now we have eight poles in sight and are surrounded by a web of cables. Underground 38-year-old ducting has been ignored.

“Residents were treated as idiots and at the meeting, the representative and engineer told us nothing we didn’t know.

“The declaration on their original information and on the poles is intimidating and more than sinister because, as a utility, they can do what they like, where they like.

“If cables can stand the rigours of being overhead, surely they can be put in the ground.”

In response to the above, Suzanne Rutherford, chief engineer for Wales at Openreach, stressed that Conwy County Borough Council raised no objections during the planning process for the poles.

She urged any residents with safety concerns raised at the meeting to provide further details so that Openreach can investigate these further.

She said: “The vast majority of Llandudno residents are looking forward to being able to use some of the fastest broadband speeds in Europe thanks to our ultrafast infrastructure.

“But we appreciate that a small number of residents in and around Liddell Park have some concerns about our build, which is why we recently attended a public meeting.

“It was a pleasure to address these concerns, but to also have a number of residents come up and thank us for the work that we’ve done in the area.

“As mentioned during the public meeting, we’ve followed the correct planning process during every step of the build and gained the relevant permissions from the council.

“To be clear, no objections were raised by the council during this process.

“We’re aware of the visual impact our equipment can have and the balance between cost effectiveness, aesthetics and safety can be difficult to achieve.

“Where possible, we use our existing infrastructure but there are times when we simply cannot avoid erecting poles.

“We’re using the smallest, thinnest poles possible for the job, and overhead fibre cables are much narrower than copper cables and less obtrusive.

“By erecting these poles in Liddell Park, we’re able to provide ultrafast broadband to more than 300 additional homes and businesses in the area.

“We take safety extremely seriously and have asked for details of those concerns that were raised during the public meeting so that we can investigate further.

“We’ve still yet to receive any further information and would ask once again for these details to be provided.”

BUSINESS owners in Craig-y-Don are seeing a boost in trade on the back of staying open later than usual on Thursday evenings in the run-up to Christmas. North Wales Pioneer | Llandudno…

THE organisers of Llandudno’s Victorian Extravaganza promise that next year’s event will be bigger and better than ever, with a Fringe Festival to rival Edinburgh’s. North Wales Pioneer | Llandudno…

A JAZZ concert will be held at a café and bar based in Llandudno later this month. North Wales Pioneer | Llandudno…