IN THE new Betsi Cadwaladr University Health Board chief executive’s first in-depth interview since taking on the role, she revealed how some North Wales healthcare could be going “hi-tech”.

One year on, she’s been through a pandemic, albeit a lighter Anitipodean version, travelled halfway around the world back to her homeland (she was born at Wrexham’s Maelor Hospital) and taken on arguably the biggest challenge in the Welsh health service.

Controversially taken out of Special Measures in November, and put into “targeted intervention”,  she knows BCUHB still has a myriad of issues to deal with.

However Ms Whitehead said she felt “humbled” to be given the opportunity to lead the board out of its troubles and regain the trust of the public.

Her first few weeks have been taken up, among other things, meeting frontline workers and hearing what they have to say.

Which perhaps explains why, more than two months into the job, she’s only now giving her first major interview – to the Local Democracy Reporting Service (LDRS). 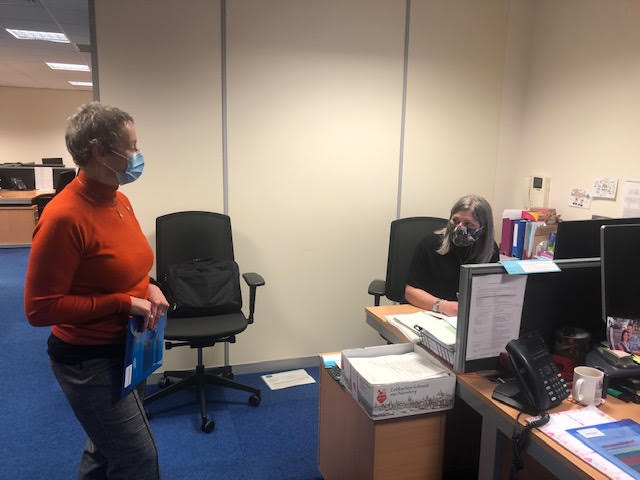 Jo Whitehead has been taking time to see what staff have to say during her first couple of months in the role Pic: BCUHB (clear for use by all partners)

She quickly revealed what her Australian experience could bring to North Wales, a region she sees as having many similarities with her former habitat.

She said: “I was most recently working in North Queensland, a coastal community with a strong tourism sector, a history of heavy industry and mining and a rural hinterland.

“The people here are very similar to the people of North Queensland – very friendly, keen and committed to their local communities, very self-reliant.

“The geography of North Wales, that geographic spread, has a similarity.”

She illustrated this by recalling car journeys to the Llŷn Peninisula from Wrexham for family holidays at the former Butlin’s site in Pwllheli.

It’s a journey which could take a whole day pre-A55 – and still can on a bad day.

The distances involved in Australia make healthcare a challenge but the way Aussies worked around the problem is something Ms Whitehead believes we can learn from.

She said: “Even before the pandemic the Australian healthcare system was keen and focused on virtual healthcare because it’s so far for patients to travel.

“As we would hop into an ambulance, patients in Australia get into a plane or a helicopter to be flown here, there and everywhere.

“The idea of a virtual consultation for an outpatient appointment, to save a five-hour road trip, is something the Aussies got to be quite good at.”

Although the pandemic hit North Wales hard, she says it has shown people are open to receiving healthcare in different ways here too.

Ms Whitehead added: “That’s definitely something we can learn from Australia. A recent YouGov poll showed 60 per cent of people from North Wales who responded said they are interested in looking at different ways of receiving healthcare. More of that please.”

Mental health is still under the oversight of Welsh Government’s Targeted Intervention and she acknowledged there was still work to do to gain public confidence – especially in secondary care.

It’s also an area she understands will come under greater pressure as the true cost of the pandemic on people’s well-being unfolds.

“It’s important to say compassion in care is a value I want to bring to all provision,” she explained. “Particularly so within mental health.”

More money is going into staffing to make sure people get care when and where they need it – in their own community as well as in acute settings.

She said: “We are recruiting to our early intervention teams. We are also looking at working with (GPs) because of course the first port of call for many people with mental health, or any other issue, is with their (GP).”

She also said there would be more collaboration with partners such as local councils to address some of the issues related to mental health, like poor housing, social care, employability and community support.

Her vision is about looking at the whole person, not just the clinical problem they present with.

One piece of news Ms Whitehead was able to share was a new development in the quest to build a “state-of-the-art” replacement for the Ablett mental health unit.

She revealed the board was “in the very early stages” of looking at a new site for the building elsewhere within the grounds of Ysbyty Glan Clwyd, further away from local residents’ homes.

A proposal to build the £64m, 64-bed facility and multi-storey car park was refused by Denbighshire councillors in January.

Local residents successfully argued the size and scale of the building, so close to their properties, would affect their privacy.

The new chief executive also gave an assurance planned treatment would not be affected as badly as they have been over the past year, in the event of a similar lockdown.

More than  50,000 patients are currently waiting for treatment for at least 36 weeks.

While offering “heartfelt thanks” to staff who’d gone above and beyond their responsibilities during the pandemic, she acknowledged Betsi was completing around half the number of operations it would normally do, because of Covid-19.

She said: “I would like to say thank you to everybody who is patiently waiting and assure them we are looking at patients in strict clinical need order.

“We are having discussions about mobile facilities which we are looking at dropping into our acute sites.

“That additional physical theatre, bed and diagnostic capacity will help us to try and catch up on our backlog.

“We’re expecting those temporary facilities to be available during the summer months.”

The board has also been implementing weekend rotas to try and catch up on the massive backlog of work it’s facing, as well as sending patients to different sites to maintain their treatment around Covid.

Some work will be sent to private healthcare providers too.

She added: “The important thing is to maintain that healthcare free at the point of delivery.”

There are also plans “in the very early stages” to develop diagnostic and treatment centres, separate from emergency treatment and surgery, which would safeguard planned procedures in the event a future lockdown.

Ms Whitehead added Covid would “continue to be with us, in one form or another, for a very long time”.

With more than 30 years as a self-confessed “bureaucrat” she says she’s focused on helping her frontline staff provide “really great healthcare” not beefing up the management team.

She said: “My experience has taught me the people who know best about healthcare are frontline clinicians.

“It’s my job as chief executive to provide a supportive environment so those clinicians can do what they do best.

“It’s a team effort and includes receptionists, porters, cooks, cleaners and people (in administration) – they are Betsi.

“I do think it’s about simplifying things and getting behind frontline clinicians to support them.

“For me it’s all about enabling those frontline clinicians to do what they do best.”

FORMER Special Forces sergeant, broadcaster and best-selling author Jason Fox is taking on a new expedition in 2023 as he plans to share his life experiences with audiences in Llandudno. North Wales Pioneer | Llandudno…