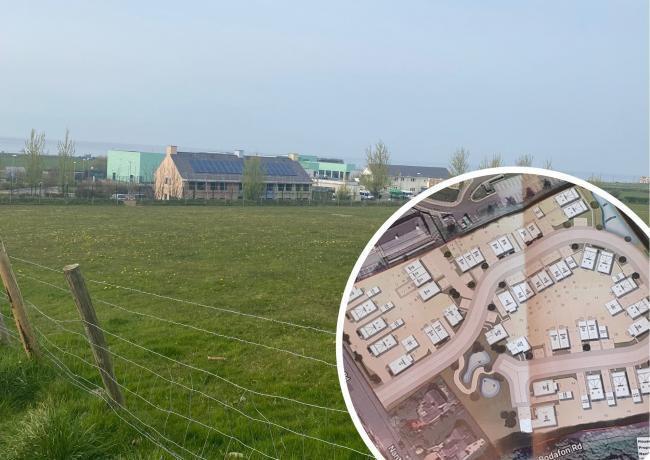 THE MP and MS for Aberconwy, as well as councillors and a Llandudno resident, have shared their reactions to the rejection of an application to build 49 homes on a Llandudno greenspace.

Anwyl Homes’ proposal for 49 new homes, 17 of which would have been affordable, was put forward for land which forms part of a registered historic landscape, at the corner of Bodafon Road and Nant-y-Gamar Road, Craig-y-Don, next to Ysgol Y Gogarth and Llys Gogarth residential facility.

At a meeting on March 9, following a site visit the previous day, members of the Conwy County Borough Council planning committee voted 6-5 in favour of the application being rejected, with one abstention.

At the planning meeting, arguments against the development included the impact it will have on congestion on the roads, as well as at Ysgol Y Gogarth, a school for pupils with special educational needs aged between three and 19.

Those in favour of the development suggested it would alleviate Conwy’s housing crisis, and that it did not present an equality, transport or environmental impact.

Janet Finch-Saunders, Aberconwy MS, spoke of her delight at the news, having written three letters outlining planning policy routed reasons as to why the estate should not have the go-ahead.

She said: “Anwyl should have concentrated on building homes in West Shore rather than submit an application for Craig-y-Don which has caused considerable distress.

“I believe that there are numerous examples of planning policy areas where the application is in breach, such as the mix of market housing types; the need to protect and, where appropriate, enhance cultural and heritage assets; possible impact on archaeological interests; shortage of parking spaces; no provision of electric vehicle charging points; the potential impact on Ysgol Y Gogarth and Llys Gogarth; and access to Ysgol Bodafon.

“I would like to thank those on the planning committee who have stood firm with the residents and democratically elected representatives of Aberconwy, from town council to Welsh Parliament, in voting to refuse permission for this development.

“Those members who have rejected the application have voted in the best interest of the youngest and most vulnerable in society.”

“There is a really vibrant community here in Llandudno, so it is important that the council keeps its development plans under review to make sure that we secure the right housing in the right place at the right time.”

Gareth Pritchard, a resident of Rhiwledyn, Llandudno, was also delighted with the news.

Mr Pritchard had previously written a joint letter with his wife, both of whom worked in the teaching profession, to Iwan Davies, the council’s chief executive, highlighting other worries such as the impact on the area’s wildlife.

He said: “I am extremely pleased; the refusal will be welcomed by many.

“Ysgol Y Gogarth pupils and staff will have a better environment. The traffic problems on Nant-y-Gamar Road, which are bad enough at the moment, won’t become worse.

“Good-quality agricultural land will be preserved. My worries about the wildlife preservation will be less; the oystercatchers and curlews are a joy to observe.

“Where else could you have such a wonderful view as we have of the bay and the town as we travel from the Little Orme area to Llandudno?

“Let’s hope it will be preserved for future generations.”

Similarly, Councillor Anthony Bertola, of the Craig-y-Don ward on Llandudno Town Council, said: “I’m pleased on behalf of the local residents, in terms of the initial disturbances and the environmental changes it may cause, on what has traditionally been an open field for many years.

“You have to be pleased for that; we obviously didn’t want the disturbance at this stage.”

Cllr Gareth Jones (Craig-y-Don ward) added: “I am pleased that serious consideration was given to the school’s needs and that it dominated the debate.

“I believe that other factors were of equal importance and should have been grounds for refusal such as agricultural land, green land, wildlife and the actual landscape itself.

“Everything hinges upon what is within and without planning regulations.

“The eight-week allowance for the developer to mitigate the impact of construction and the houses themselves upon pupils’ education will be the subject of intense scrutiny and the outcome is difficult to predict at this stage.

“There could also be an appeal against the Authority’s decision should it maintain its refusal. The decision will then rest with the planning inspector and his/her interpretation of planning regulations.

“The inspector will take all aspects – including the school’s situation -into consideration and I trust that the final evaluation will be refusal.

“I am not a planning expert but I truly believe that there are sufficient other grounds for refusal not solely based on the impact upon the school’s education provision.

“Furthermore, I sincerely hope that a final refusal to develop this part of the fields will lead to a once and for all safeguarding clause which will maintain the fields as a green area in perpetuity.

“Llandudno deserves that, and I know that our community would campaign tirelessly to achieve that.”

There was nobody available for comment from Anwyl when approached.